Biophilic Design in Light of Art, Neuroscience, and Technology

The Women's Board Center for Radiation Therapy unveils a family's gift to the hospital.

On March 30th, the Marker and Bednarz families, distinguished members of the Rush and Oak Park Hospitals, along with Sky Factory representatives, came together for an evening dedication ceremony at The Women’s Board Center for Radiation Therapy at Rush University Medical Center. 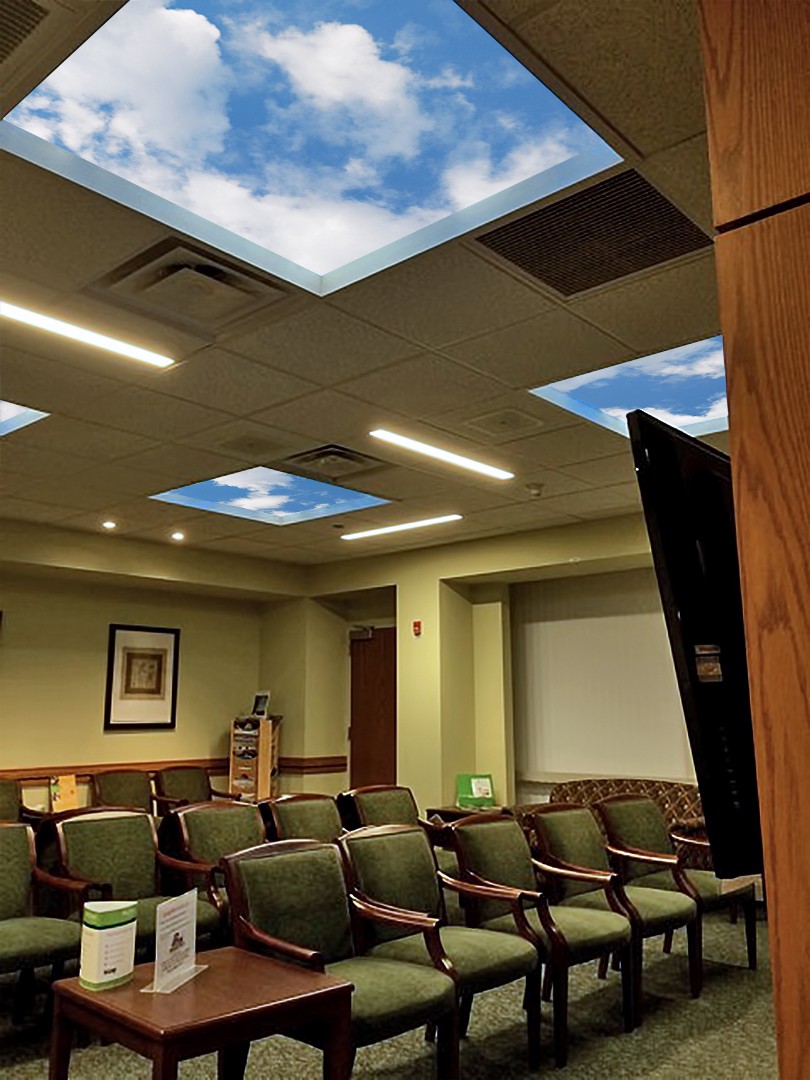 The group officially unveiled The Thomas P. and Marcia L. Marker Revelation SkyCeiling, the first of its kind in a patient waiting room environment in the United States. The plaque commemorates and details the therapeutic value of Sky Factory’s Luminous SkyCeilings, the only research-verified virtual skylights to be the subject of published, peer reviewed studies.

This architectural gift capped a two-year project that began when Sheri Marker-Bednarz, who recently retired from the Rush Medical Center as the Vice President of Human Resources, and her brother Mark Marker, principal at MD Marker & Associates (now retired), a management consultant firm specializing in business strategy, sought to bestow a meaningful contribution to the healing environment at Rush Medical. 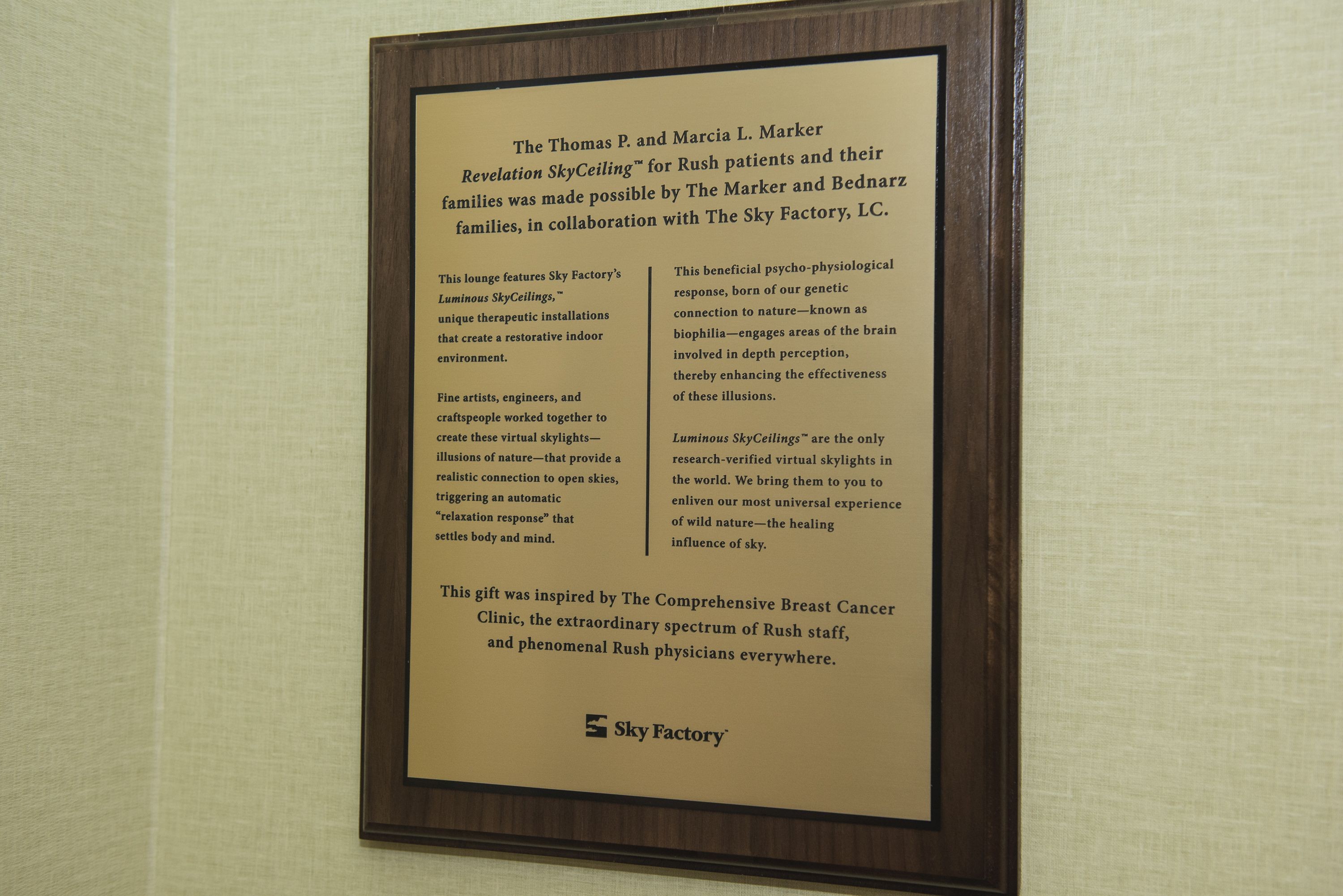 “The gift was inspired by The Comprehensive Breast Cancer Clinic and the extraordinary spectrum of Rush staff who treated our mom,” says Sheri. “During her treatment at the clinic, we were incredibly grateful for the phenomenal Rush physicians at her disposal.”

The installation was initially intended for the lounge at The Comprehensive Breast Cancer Center, but when the ceiling proved to be unsuitable to retrofit a Luminous SkyCeiling, Shawnda Mays, the Administrative Director at Rush Medical Center, proposed that the virtual skylight be installed in the patient lounge at The Women’s Board Center for Radiation Therapy.

“Shawnda was great,” says Mark Marker. “She was the organizing force behind this effort bringing people together from engineering, facility planning, and philanthropy to look at the best location.” 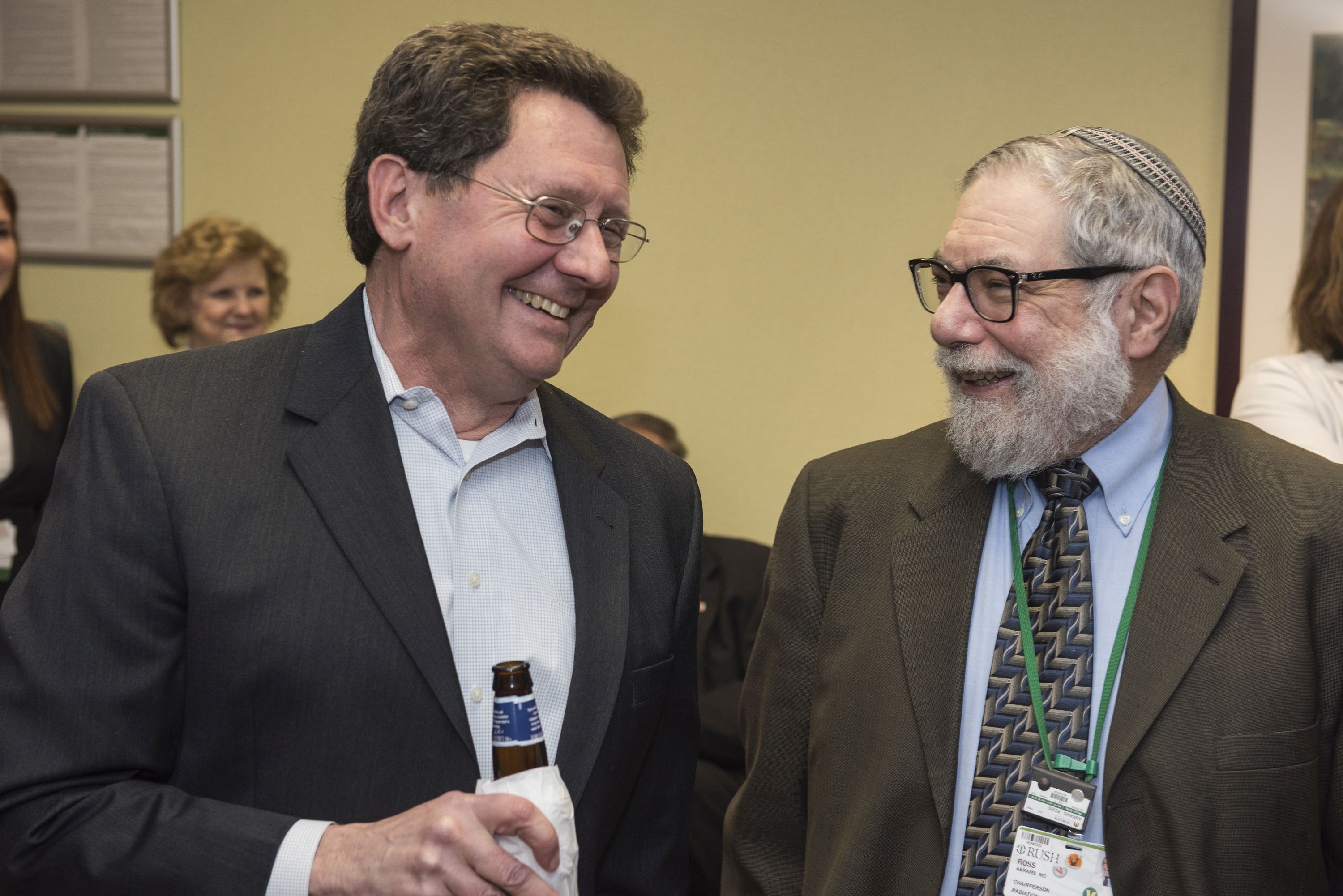 “We’re very fortunate to have the first installation of this product,” said Dr. Ross Abrams, Chair of Radiation Oncology Dept. who gave the opening remarks and thanked both families for their philanthropic work.

“I am incredibly pleased and honored that Sheri and her family and Sky Factory have continued the relationship with the department and by honoring us with this beautiful gift, which has a great deal of thought and wisdom behind it.” 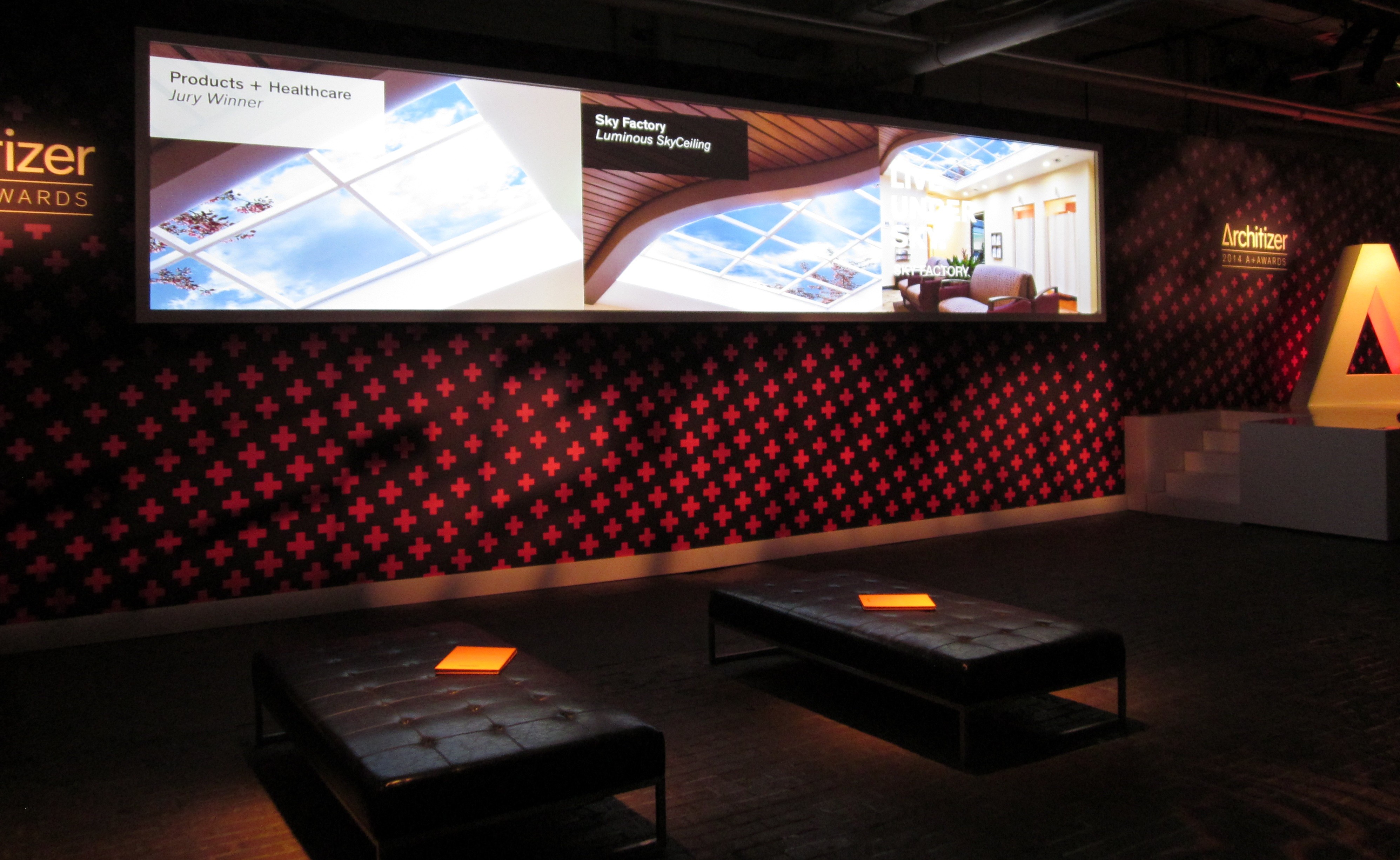 The Revelation SkyCeiling, designed for larger interior spaces, earned the Popular Choice Award in the Ceiling Finishes Category the following year. The winner is selected among five finalists handpicked by Architizer’s prestigious jury. The finalists are then showcased online during a two-week period where design professionals and enthusiasts around the globe cast their vote.

The Revelation SkyCeiling earned the top recognition from over 40,000 votes cast.

“After almost a decade and a half in the business, we appreciate that leading architects and designers recognize the genuine therapeutic value that biophilic illusions of nature have in enclosed interiors,” said Skye Witherspoon, CEO of Sky Factory. 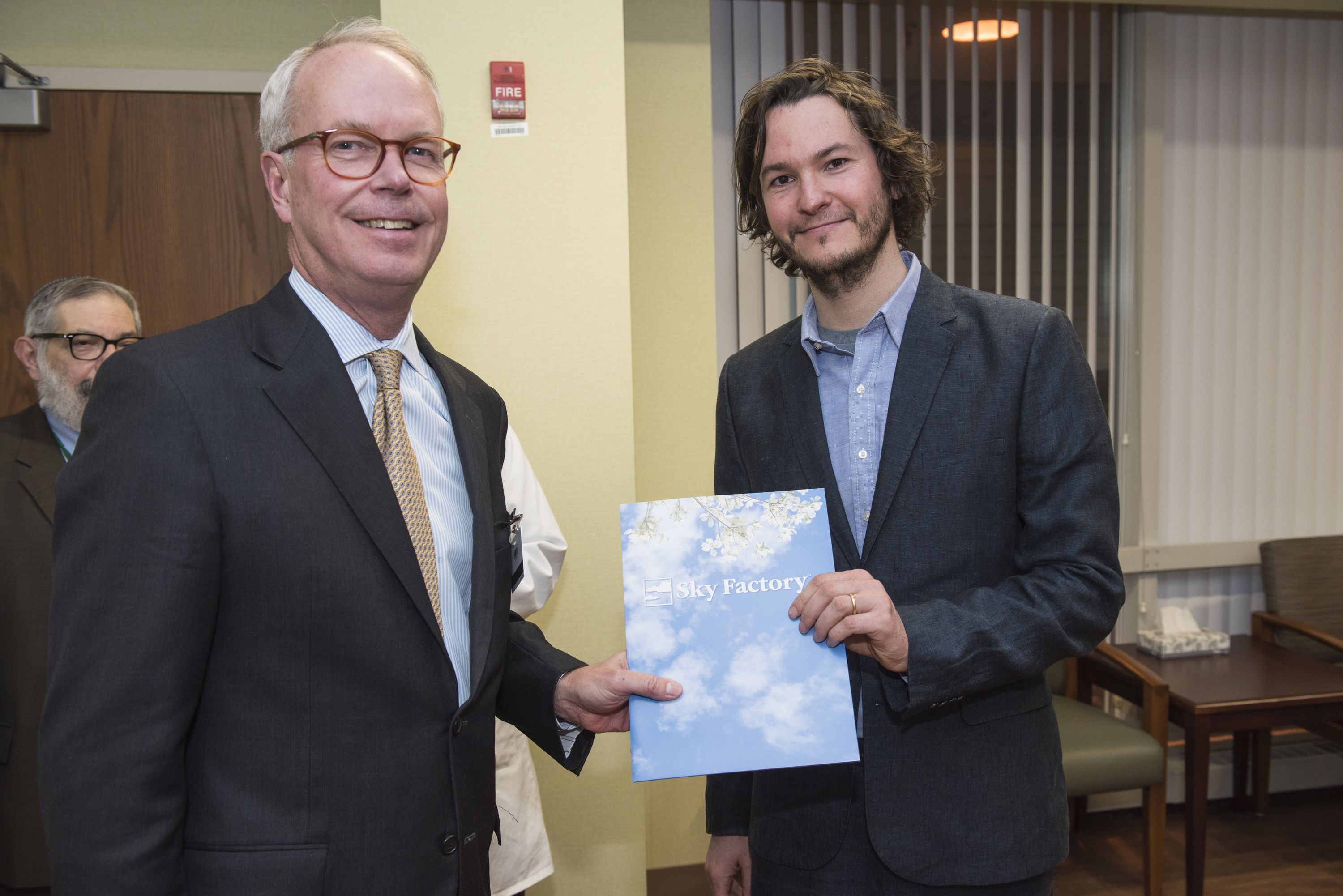 “There is an entire building category type, deep plate buildings, which by design, feature large areas of isolated interiors. Applying Sky Factory’s Open Skies Image Technology, our team of artists and engineers can give rise to what we call perceived open space. When occupants perceive an organic connection to a natural exterior, the sensation triggers biophilic engagement, the relaxation response we feel in natural environments,” Witherspoon added.

The Revelation SkyCeiling was named not only in honor of Sheri and Mark’s mother, Marcia L. Marker, but also in loving memory of their father, Thomas P. Marker. A video clip of the event is available below.